A trio of friends dedicated to the Blessed Mother 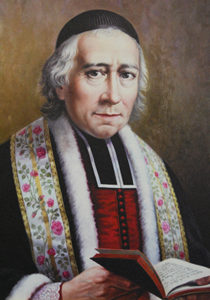 William Joseph Chaminade was born on April 8, 1761, in Périgueux, France. He was the 14th of 15 children in the family of Blaise Chaminade and Catherine Béthon.

Early in his life, William knew he wanted to consecrate his life to God; he was ordained as a diocesan priest in 1785.

The French Revolution (1789 – 1799) profoundly shaped the course of Fr. Chaminade’s life path. Anti-church legislation made it impossible for Catholic clergy to continue normal ministry. Fr. Chaminade adopted a dangerous, anti-government stance; he refused to pledge allegiance to the government instead of the Roman Catholic Church and the Holy Father, Pope Pius VI.

In the early years of the revolution, Fr. Chaminade was able to continue a clandestine ministry in Bordeaux, sometimes disguising himself as a tradesman so that he could take the sacraments to his flock.

In 1797, in fear for his life, Chaminade was driven into exile in Saragossa, Spain. There he prayed daily at the shrine of Our Lady of the Pillar, continuing a devotion to the Blessed Mother that was formed in the earliest days of his childhood. During this time in exile, Chaminade conceived of a plan that would sculpt the rest of his life.

When he was able to return to France in 1800, Fr. Chaminade began implementing his vision. He formed small faith communities called sodalities. In a country where there had been no religious instruction for a decade, he believed this would be the most effective way to reignite Christianity.

Fr. Chaminade joined forces with Marie Thérèse Charlotte de Lamourous, an intelligent, brave woman who had served in the underground Church during the revolution. In partnership with Fr. Chaminade, Marie Thérèse helped form and guide the women’s sections of the sodalities.

The pair began with a handful of sodalists. By 1809, these early Marianist Lay Communities had nearly 1,000 members. One of Fr. Chaminade’s favorite expressions was “union without confusion.” Through a carefully developed system of interdependence, all members – of varying ages and social classes, and of both sexes – cooperated as equals under his leadership.

Through friends, Fr. Chaminade came into contact with a young woman named Adèle de Batz de Trenquelléon. Like Chaminade, Adèle was committed to the “mission of Mary.” In 1816, with support from Chaminade, Adèle founded the Filles de Marie Immaculée, the Daughters of Mary Immaculate, commonly known as the Marianist Sisters.

Just a year later, a group of male sodalists came to Chaminade with the goal of forming a religious institute under his direction. On October 2, 1817, these faithful men formed the Society of Mary. Like the Marianist Sisters, this congregation was pledged to carrying out Mary’s apostolic mission in the world.

From the beginning, the Marianist Sisters and the Society of Mary were open to calls of divine providence in their ministry, and they found a focus in forming others in faith, particularly through education and apostolic faith communities.

By 1830, Fr. Chaminade’s communities had established or assumed administration of many public schools. Fr. Chaminade’s dream of bringing Christ back to France was taking shape.

In his often-quoted “Letter to Retreat Masters” in 1839, Fr. Chaminade outlined what he thought were the most distinguishing characteristics of the two religious congregations. “We are convinced that we shall not bring others back to Jesus except through his most holy Mother, whom the Doctors of the church acclaim as our only hope …” he wrote. Later in the letter, he continued, “… we have taken for our motto these words of the Blessed Virgin to the attendants at Cana: ‘Do whatever he tells you.’”

In the ensuing decades, Fr. Chaminade’s goal of continuing the “mission of Mary” has endured. Today the Marianist Family – brothers, priests, sisters and lay people – continue this mission in more than 30 countries.

Fr. Chaminade was beatified by Pope John Paul II in 2000.

To learn more about this Marianist founder, consider reading the short biography, Chaminade: Pragmatist with a Vision, by Fr. Joseph Stefanelli. 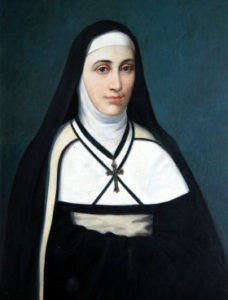 Blessed Adèle de Batz de Trenquelléon was born on June 10, 1789, to an aristocratic family in Trenquelléon, about 60 miles southeast of Bordeaux, in southwestern France.

She shared her birth year with the start of the French Revolution, and Adèle spent part of her young life in exile in Spain and Portugal, having fled with her family in fear for their lives. The family was able to return to Trenquelléon in 1801.

Adèle felt called to religious life at an early age, and by the time she was 13, she had devoted herself to preparing for a vocation as a Carmelite. At 15, she was the leader of a small group of girls who had formed an association for prayer and spiritual growth.

Through a fortuitous series of circumstances, she came into contact with Fr. William Joseph Chaminade when she was just 19. Adèle and Chaminade were kindred spirits, both dedicated to the mission of Mary in bringing others to Christ.

With the support of Fr. Chaminade, and in the company of a small group of women, Adèle established the Filles de Marie Immaculée – the Daughters of Mary Immaculate – on May 25, 1816, in Agen.

Like the sodalities of lay people, Mother Adèle’s congregation sought to continue Mary’s mission. The Filles integrated the contemplative life of the Carmelites, to which Adèle had long been attracted, with the active missionary energy of the sodalities.

Under Adèle’s leadership, the Filles served the poor and needy, while also assisting with the development of the sodalities of women. There were difficult years for Adèle as she sought to guide her young congregation through financial difficulties, sickness and personality conflicts.

Yet the Daughters of Mary Immaculate began to spread. New convents were founded across France in 1820, 1824 and 1826.

Mother Adèle died at the young age of 38, on Jan. 10, 1828. Throughout her life, she had placed service to God and the poor ahead of her own wealthy heritage. She loved, but regretted that she could not love more.

“Let us become saints, cost what it may. Let us constantly ask for the help of the Blessed Virgin,” Mother Adèle once wrote in a letter.

Mother Adèle was beatified on the anniversary of her birth, June 10, 2018. The ceremony of beatification was presided over by Cardinal Angelo Amato, Prefect for the Congregation of the Saints. Numerous representatives from the Church of France were present, including Archbishop Michel Aupetit of Paris . At the Vatican, Pope Francis referred to Blessed Adèle as a “gift to the whole church” during his mid-day Angelus on Sunday, June 10, which garnered applause from all the faithful present in St. Peter’s Square.

To learn more about this Marianist founder, consider reading the short biography, Adèle, Aristocrat for the Poor, by Fr. Joseph Stefanelli. 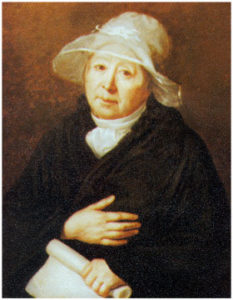 Born on Nov. 1, 1754, Marie Thèrése de Lamourous was the oldest of 11 children in a noble, but relatively poor family of Barsac, in southwestern France.

She moved to Bordeaux with her family when she was 12. Her father was a poor businessman and all but ruined the family finances. When Marie Thèrése’s mother died in 1785, he began to show signs of failing mental health. Marie Thèrése became head of the family on the cusp of the French Revolution.

When the local parish priest was forced to abandon his flock in the revolution, Marie Thèrése, stepped into the leadership role. She was the heart and soul of the parish community for the next six years.

She gathered the parishioners for prayer, religious instruction and family counseling. She orchestrated secret Masses celebrated by disguised priests. In short, she was a determined operative in the underground Church.

Around 1795, Marie Thèrése met Fr. Chaminade. The two became fast friends and close collaborators. They met in person when they could and they corresponded regularly, even during Fr. Chaminade’s exile in Spain.

When the Revolution came to a close, Marie Thèrése looked forward to a peaceful existence helping her two sisters raise their children. But when Chaminade returned to France, he called on her to help him develop the sodalities. It was a calling she fulfilled with great success.

Still, Marie Thèrése’s major work after 1800 was breathing life back into a badly needed ministry in Bordeaux: providing a place to live and an opportunity to change for prostitutes who wished to redirect their lives.

With few financial resources, but with great confidence in God, she purchased at auction a former convent and named it Maison de la Misericorde – the House of Mercy.

She took in as many prostitutes as it could hold — eventually up to 400 at one time. The only condition for entry was that the women wished to change their way of life. The women came freely. They stayed freely. They worked at trades ranging from laundry to sewing to making cigars! Marie Thèrése lived a common life with the residents, joining them in work, meals and prayer. Through her skill and dedication – and despite overwhelming obstacles – the work prospered.

In time, the work of Bonne Mère (good mother) Marie Thèrése was imitated in other French cities. By the time of her death in 1836 at age 81, she was known as the “saint of Bordeaux.”

She and Fr. Chaminade remained close throughout her life. She is deservedly recognized as a co-founder with Fr. Chaminade of the lay branch of the Marianist Family.

The process of Marie Thèrése’s canonization was begun in 1911. She was named “venerable” in 1989.

Tell us your reviews

congratulations pioneer class for making it 100% in JCE, Alutta Continua